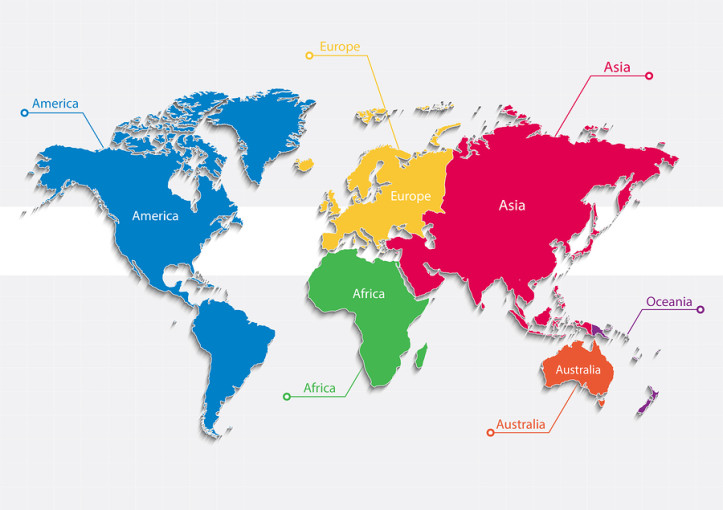 The variety of different maps impresses. It’s impossible to count all the existing types and variations of them as every day something new appears. Moreover, maps aren’t used for geography and education only. They are widely applied in other sciences, business and, even, just for the aesthetical pleasure. We have gathered some interesting information about maps, which will help you not only to understand what map poster you need but also to broaden your outlook.

Maps can be of various types and may serve for absolutely different purposes. The most well-known types of maps are physical, political, topographic, climatic, economic, demographic, road, travel, historic and thematic ones. Let’s consider each type in more details.

Physical maps of world represent the physical features of the regions like mountains, rivers, forests etc. Each type of the surface is marked with a special color. Thus, mountains are usually brown and the darker the color the higher the mountain is. Forests are usually marked with green, rivers with blue and deserts with yellow. However, the use of colors may vary. Such maps are used at the geography lessons and for scientific purposes. Some people also use them for wall decoration at their homes and offices. A Physical Map of the World

This kind of the wall map of the world is the most widespread one. They show the political divisions and national borders of countries as well as their capitals and large cities. Such maps also contain the information about the main geographical and political changes in the world like emergence of new countries, their status changes, split and merger of countries, acquisition or lose of sovereignty, the changes in the countries’ area, their capitals and forms of administration. Political maps can be used in many spheres of life, including education, business and travelling. A Political Map of the World Poster

A topographic map contains information about all natural and man-made features like the relief, hydrography, vegetation, soil, household objects, roads, communications, borders and other objects. Such maps are usually used for geographical planning, architecture, mining, civil engineering and earth sciences. A climatic wall world map depicts the peculiarities of the climate according to long-term, annual, seasonal and monthly data. Such maps show such features as temperature, precipitation, directions of wind, atmospheric pressure and cloud cover. They represent the climatic zones as well, highlighting their differences with various colors. Climatic maps can be used at educational establishments as well as for scientific research, weather forecasts and personal use for those, who are interested in climatic issues. Economic pictures of the world map depict economic phenomena and are usually used for planning the development and management of the economy. They can show the economic zones, levels of the economy development, import/export features as well as labor and mineral resources. Economic maps can be general or more specific like transportation or agricultural maps. Such maps are widely used by entrepreneurs, business analysts, logisticians, investors and those, who study the world economy. Demographic or population maps represent geographical, social and economic features of the population, its dispersal and interaction with the environment. Demographic maps include the maps of population dispersal, number, density, dynamics, its sex and age composition, demographic processes like childbirth, mortality, marriages, natural increase etc. They may also show the population migrations, professional activities, workforce, and level of education. There are also ethnographic maps, which show the racial, national, confessional composition, elements of material and spiritual culture, anthropologic peculiarities of the population. Such maps are most widespread among sociologists and culturologists. Road maps are most commonly used by drivers, transportation companies or companies, which need to deliver goods to their clients. They feature roads, transportation links, buildings, recreational facilities, airports, train stations and most important landmarks. This kind of a map is partly similar to the political one, though with more details, and is often referred as its type. A Piece of a Road Map Poster

Travel maps depict cities, airports, hotels, shopping centers, sights and other wonders of the world. They are very useful for tourists as they help them not only not to get lost but also to find some places of interest. A world travel map is ideal if you want to pin all the places you have visited and which you are about to travel too. The main goal of a historic world map print is to show the historical events, phenomena, processes, certain time periods, the borders of ancient lands with the help of special marks. Such maps are created to show the course of the historical process not only in time but also in space. They help history teachers to explain certain historical phenomena to their students, show connections, reasons, consequences and the essence of the events. You can find a number of various thematic maps for sale, which can be used in any sphere of life. Thematic maps feature natural, social and economic phenomena, dedicated to a certain theme. Everything can be mapped: air flows in the atmosphere, ocean fauna, cargo transportation and population growth, incidence of flu and participation in election, sports or music preferences of the citizens of different countries. A thematic world map poster may cover atmosphere, lithosphere, hydrosphere, biosphere, technosphere and social sphere as well as the fields of their interaction. Moreover, not only real but also abstract objects are mapped like the productiveness of vegetation or the stability of the economic growth of the territory. Outline maps represent only the silhouettes of the continents. They have almost no educational use and are more widely used for decorative purposes. You may take a giant world map poster and decorate the walls of your room or office with it. Such a picture can be done in all possible colors. In addition, such a map can also be used for some business purposes, for example, to make a presentation. Blank pictures of maps show only boundaries and contain no additional information. They are quite often used in educational purposes for pupils and students to memorize where the countries are located by filling up the blank map. Such maps with a south-up orientation have some psychological meaning. The scientists state that ordinary maps have some psychological influence on people and cause a number of prejudices and associations, for example, like richer people live in the north and the poorer ones in the south. When the map is shown in the reversed way, such biases disappear. However, it’s rather risky to use such a poster for educational purposes, especially with small children. The main minus of a globe world map is that it doesn’t show the whole world in one picture. Its aim is to look more realistic and show how our planet looks. Such map posters can serve for educational and scientific purposes. 3D maps are more frequently used in the digital variant, but they can also be printed. Just like outline maps, they serve for decoration and business goals. They can either be contour maps or the ones, which feature all the relief peculiarities. The latter ones are also used for education. A vintage world map poster is an ideal variant for those, who are fond of old and antique things. It will be a good wall decoration for your home. It will also be a good present for a friend or relative. A vintage map can be either a really old world map poster or absolutely the new one, but which looks like it’s antique. Those, who don’t want to use colorful maps, select a black and white world map. However, not all maps look good without some color accents. Thus, the physical and climatic maps will fail to show some details if they are printed in black& white. Political maps, in their turn, render the information well no matter in what colors they are made.

It’s rather hard to make a child remember all the countries and their geography. The educational process will be easier if some additional things will be added to the map. For example, by placing the pictures of animals on those regions, where they dwell, you will help a child not only to learn geography but various animals as well. A World Map Poster for Children

There are also some interesting designs of maps, which are primarily used as world map wall art or gifts. Their main function is aesthetical and they can be rarely used for businesses, education or science. Such maps are more suitable for art admirers or those, who want to decorate home or office with an exclusive map.

Such a map is made of small dots either of one or different colors. The image looks as if it’s pixilated and will be especially liked by those, who spend a lot of time in front of a computer. Abstract maps will be a good decoration for a living room in high-tech style or office. They are available in different colors, but the multi-colored ones look more vividly. Such a print will also look good on a custom T-shirt Such a kind of world map art will be to the heart of creative personalities, who are fond of art. By presenting such a map, you will definitely reach the “wow” effect from a gift recipient. Text maps are more likely to be highly estimated by linguists. The boundaries aren’t seen in this kind of a map, but all the titles are in their place. Almost everyone liked to do puzzles in childhood. Such a poster depicts a ready puzzle picture, but still reminds of our childhood a bit. At the same time, it’s rather strict and contains no extra details. It will be a good decoration for office or working place. Ink maps are similar to the watercolor ones, however are less colorful. Such a map suits a more conservative and discreet person. A large world map poster, where national flags are used instead of the countries names, is rather a nice substitution for the ordinary map. Moreover, it helps to train memory. A World Map of Flags Poster

Speech bubbles can also be a material for creating a world map. This way of the map presentation looks very fresh and original.

The list of all the possible map posters designs doesn’t end here. There are many other ways of how to make a nice map. Moreover, you can create your own design of the world map and have it printed.