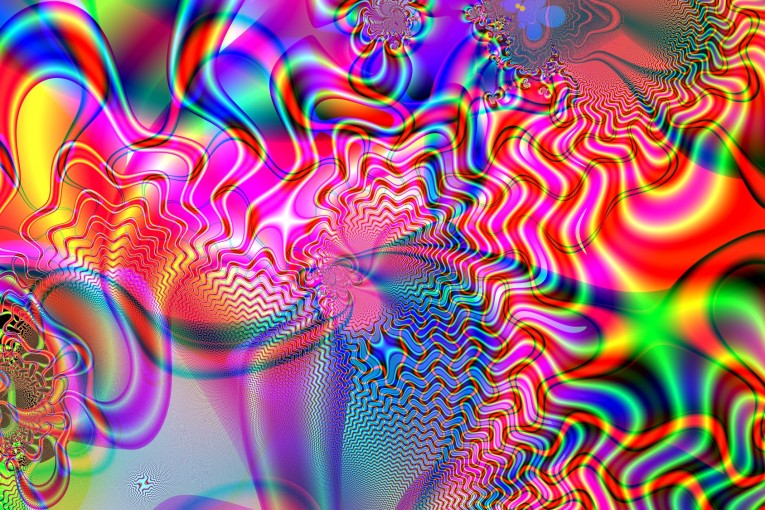 Trippy art, which is better known as psychedelic art, is the depiction of a surrealistic vision of the world, inspired by the psychedelic experiences and hallucinations in the result of taking drugs. Trippy artists try to depict the inner world of the psyche by different methods. The main features of trippy art are: fantastic and surrealistic themes; fractal patterns; bright and saturated colors; much attention to details; combination of themes and styles, collage artworks; phosphenes, spirals, circles, diffraction patterns.

However, in the digital era, this kind of art was revived and its possibilities were expanded. In fact, the depiction of many psychedelic experiences became easier with the development of technologies. With the creation of various computer programs, it became possible to create a number of interesting designs, including the 3D ones and optical illusions effects.

Nowadays, trippy posters are considered to be a separate kind of art. They are used for home décor as well as for the interior designs of cafes, restaurants and other places. Moreover, they are liked by the people of absolutely different ages, genders and professions. Let’s consider the brightest examples of the psychedelic art in more details.

Blacklight posters used to be the most popular type of trippy posters, but fell out of favor. However, they have started to be used again recently and so, we can state that they have returned the attention they lost. Their main feature is that they are created with the help of blacklight reactive paint, which glows if exposed to an ultra violet light source. Trippy black light posters may feature a number of themes, including landscapes, portraits, images of aliens, mushrooms or just swirls. A blacklight poster can become a nice décor for your apartment. In addition, it looks especially cool if placed near the dance floor. So, if you are going to organize a party and have an opportunity to acquire such a poster, do it. It’s impossible to imagine art, which is associated with drugs, without weed images and posters. Such posters usually feature the photos of cannabis, people, smoking marijuana, or its cartoon pictures. The weed may be presented in a more creative way, for example, with the help of optical illusions or other interesting techniques, which make the image hidden or more original. Mushroom theme is also typical for a trippy poster. The images of shrooms and the effects they have on humans are often referred as magic mushrooms prints. Very often, trippy art posters try to depict hallucinations from within and get us to the magic world. The images of the wonderland, magic locations or trips are common within this theme. The posters, featuring different kinds of swirls, can be also considered as abstract art. They are usually designed in bright and saturated colors. Such images attract attention immediately and that’s why, if you need to have a bright spot in your interior décor, a trippy swirls poster will become a good choice. Optical illusions are visual tricks, when images are perceived differently from what they really are. A human brain interprets what the eyes see in a way, which contradicts physical measurement of the image. When looking at such a poster, you have an illusion that all the lines on the picture move in a pulsating pattern or you are able to see the hidden patterns and images. If you stare at such a poster for a long period of time, you have a chance to hypnotize yourself. If you want to surprise someone and appeal to his or her mental abilities, the optical illusion poster is for you. Fractal art is an algorithmic art, which is based on the creation of images, using mathematical calculation of fractal objects. Fractal pictures consist of similar elements and a number of their shapes, which create intricate patterns. You may also face fractal shock prints, which are usually more complicated and provocative. Trippy posters and tapestries, featuring nature, are creative and original substitutes to landscape photos and paintings. They usually feature a nature scene or more detailed images of trees, flowers and other plants. Such posters are either very bright or a bit blurred as the effect of hallucination still needs to be present. Any animal or pet can be depicted on a trippy poster. Besides, it’s possible that a trippy poster of such a kind feature not an image of a certain animal, but a number of animalistic prints, for example, an image of an elephant, which consists of the images of other animals. One more available type of trippy posters for sale is the one with aliens and humanoids. The theme of the outer space is close to the representatives of trippy art and so, the images of green creatures from other planets look rather essential in psychedelic works of art. There are also cool trippy posters with funny images. They may cover a great number of themes, not only the ones connected with drugs and hallucinations. One of the examples is a smile image on the cannabis background. Cheap trippy posters with black and white images don’t look so expressive as the colorful ones. However, they are great wall art ideas for those, who want to decorate the walls with something original, but not too splashy. A Trippy Black and White Poster

Trippy posters are still popular nowadays. They influenced a number of other art movements and continue to do that. Now, these posters aren’t treated as the ones, which are created by drug-addicted people, but they are masterpieces, which impress and don’t leave anyone emotionless. Moreover, trippy prints aren’t used for posters only. You can see them on tapestries, canvases, custom T-shirts etc.